Do you want to be a US Open Ball Person?
To be considered for selection you must:

Benefits of being a US Open Ball Person:

Applications will close on Wednesday, June 16 at 5 p.m. APPLY HERE!

Compete in the NYJTL Mayor’s Cup, the largest FREE interscholastic tournament in the nation! Learn more about the tournament!
Deadline to register is June 14!

Congratulations to Kayla Moore, longstanding member of the NYJTL family, for making it to the #1 National Ranking Girls in 12’s! Kayla participated in the community tennis program, and currently participates in the CLC Academy at the Cary Leeds Center.

Last week, the ACES Program participated in DYCD’s Innovation Expo featuring innovative resources that made afterschool remote youth engagement successful this year! NYJTL nominated 10 activities from 10 different sites and all 10 were selected to present at the Expo!

Some programs might be suspended, but we are HERE for YOU!

NYJTL would like to proudly announce that 136 NYJTL heroes have voluntarily stepped up to staff the Department of Education’s crucial Regional Enrichment Centers (REC) during the coronavirus emergency.

We have also provided a library of digital resources and activities to keep families healthy and learning after regular school hours.  Check out a week’s worth of activities.

Monday
The Department of Education has provided additional materials to help keep students engaged beyond their online lessons. These resources are for students in all grades, from elementary to high school. Click here to check out these materials!

Tuesday
With so many kids home from school, GoNoodle: Good Energy at Home, is providing ways for families to move and learn together while staying active, focused, and calm! Click here to learn more!

Thursday
This comic book is an easy, and kid friendly way, to explain to your kids what the Coronavirus is and steps that they can take to keep themselves safe. Click here to read it!

Friday
After spending the day with their teachers learning online, your kids can spend the afternoon sketching Stitch from Disney’s Lilo & Stitch like a pro! Click here to watch the video!

In view of Coronavirus health advisories from CDC and NY health officials, NYJTL will be closing the Cary Leeds Center at 8 pm tonight, Monday, March 16.  Your health and safety are our number one priority.

We look forward to serving you in-person in the near future and until then please follow us on Facebook for tips on how to get the daily recommended amounts of exercise for your family at home during this time.

This past year, NYJTL created many learning opportunities for NYC youth, from providing SAT prep classes to building a community bond with the NYPD 42nd Precinct. In addition, NYJTL Capstone Events enriched the youth education experience with non-traditional forms of learning outside the classroom designed to get kids on their feet. These events included our STEAM (Science, Technology, Engineering, Arts, and Mathematics) Expo, Visual Arts Showcase, and Youth Leadership Summit, among others.

NYJTL believes that the life skills gained through our tennis and education programs are a catalyst for long-term achievement! Every program, activity and event is designed to enable under-resourced children in New York City to grow with the game and to set them on a pathway of success.

We coordinated with Nike to give five NYJTL girls the chance of a lifetime to meet Serena Williams, Naomi Osaka, Madison Keys, Simona Halep, and Sloane Stephens during Nike’s Queens of the Future event.  The inaugural NYJTL Bronx Open afforded 85 NYJTL kids the chance to get up close and personal with the world’s best professional tennis players as ball kids.

Our flagship, The Cary Leeds Center for Tennis & Learning greeted more than 15,000 guests through their doors this year and hosted the NYJTL Mayor’s Cup, the NY Empires, the NYJTL Bronx Open, and the US Open Junior Qualifying Tournament, on top of dozens of local and national junior tournaments.  The Cary Leeds Center welcomed First Book and Disney to distribute 20,000 free books to the community and partnered with Tie Break Tens to host a tiebreak tournament and fly out eight lucky juniors to the BNP Paribas Tournament in Indian Wells.

NYJTL is thankful to work with the NY Open again this year to bring our ACES and Community Tennis Program children to see world-class tennis at this 250k International men’s tournament!

Meet One of Our Kids!

Meet 11-year-old Rachel Breland (third from the left), the Community Tennis Program’s Holiday Tournament 14s winner!  Rachel’s three older brothers also played in CTP and are now coaches. Rachel plays year-round in our CTP program and has shown incredible growth both on and off the court.

Take a deeper dive and view this year’s Annual Report to learn more about how NYJTL enables kids to Grow With The Game!

“We are thrilled to welcome women’s professional tennis back to the Bronx after a seven-year break during the construction of the Cary Leeds Center, “said NYJTL CEO George Guimaraes. “The WTA and the USTA have both stepped up to make this a world-class tournament to serve as the players’ final preparation for the US Open which starts two days after our final.”

The NYJTL Bronx Open will be the only WTA tournament during the week prior to the US Open and will feature a 48-singles qualifying and 30-player main draw plus a 16-team doubles draw.

WTA CEO and Chairman Steve Simon stated, “We look forward to bringing the WTA Tour to the Bronx this season, providing our world class athletes the opportunity to compete at the new state of the art Cary Leeds Center.”

“The Bronx looks forward to the return of women’s professional tennis to our community,” said Bronx Borough President Ruben Diaz Jr. “This tournament will inspire the next generation of future sports stars to pick up a racket and get out to play in the new Cary Leeds Center in Crotona Park. We are grateful to NYJTL for everything you do as a partner in the community, and we thank the WTA for bringing the world’s best players to the Bronx.”

“While temporary facilities were constructed each year in the past, this year the $26.5-million Cary Leeds Center will provide a world-class facility with two stadium courts and access to a total of 20 additional courts,” he continued. “The Cary Leeds Center also includes a two-story, 12,000-square-foot clubhouse with classrooms, and the Victor Kiam Stadium and the Pershing Square Stadium create an up-close and intimate tennis viewing experience.”

“Introducing new people to the sport of tennis and opening up our doors to the community is our life’s work,” said Liezel Huber, seven-time Grand Slam Champion and Executive Director of Tennis at the Cary Leeds Center.

NYJTL is the largest tennis and education non-profit in the nation committed to creating the ultimate aspirational experience for thousands of New York City children served through its programs.

The mission of New York Junior Tennis & Learning is to develop the character of young people through tennis and education for a lifetime of success on and off the court.  Since 1971, NYJTL has changed lives through tennis, education, healthy living, and character development programs. Today, it is the largest youth tennis and education non-profit in the nation, reaching 85,000 K-12 New York City youth.

In June 2015, the $26.5 million Cary Leeds Center for Tennis & Learning opened its doors as the flagship home of NYJTL in the heart of the Bronx.  In April 2017, the Cary Leeds Center completed its final phase of construction with the opening of the Pershing Square Stadium, the Victor Kiam Stadium, and the Dalia and Larry Leeds Viewing Bridge.  The Cary Leeds Center provides more than 6,000 hours of free tennis court time annually to the community’s under resourced youth.

There’s no stopping ACES Afterschool Participants when it comes to creativity, and the kids held nothing back for the Fourth Annual Visual Arts Showcase, Art In Motion: #WATCHMEWORK.

The showcase was held on June 11, 2019 at the CUNY York College Milton C. Bassin Performing Arts Center, a location that holds great significance as it represents a bright future for the students in higher education. The event offers an opportunity for teachers, friends, family, and the students themselves to celebrate their achievements during the school year, embark on a creative journey and explore what it means to be an NYJTL artist.

For the first time, the showcase also honored staff achievements during the NYJTL “SUPER ACE” award ceremony. NYJTL staff members who demonstrate strong leadership skills and moral character were recognized as role models for both their peers and the students.

Though NYJTL is a tennis and education-based organization, leaders strive to instill in their students the passion for creativity and learning that goes beyond the court and the classroom. 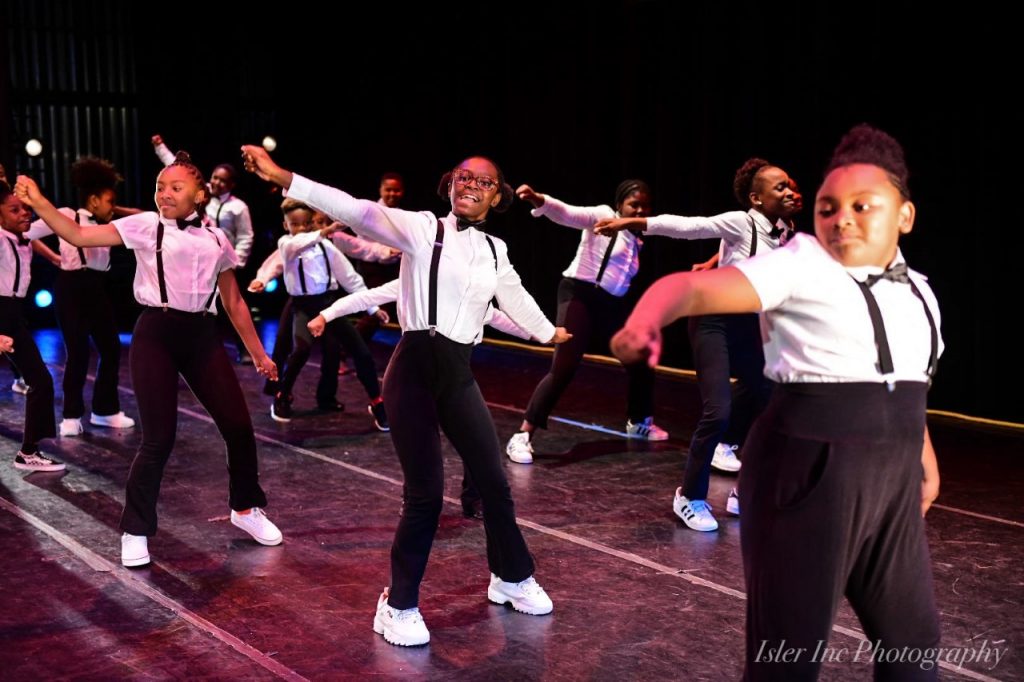 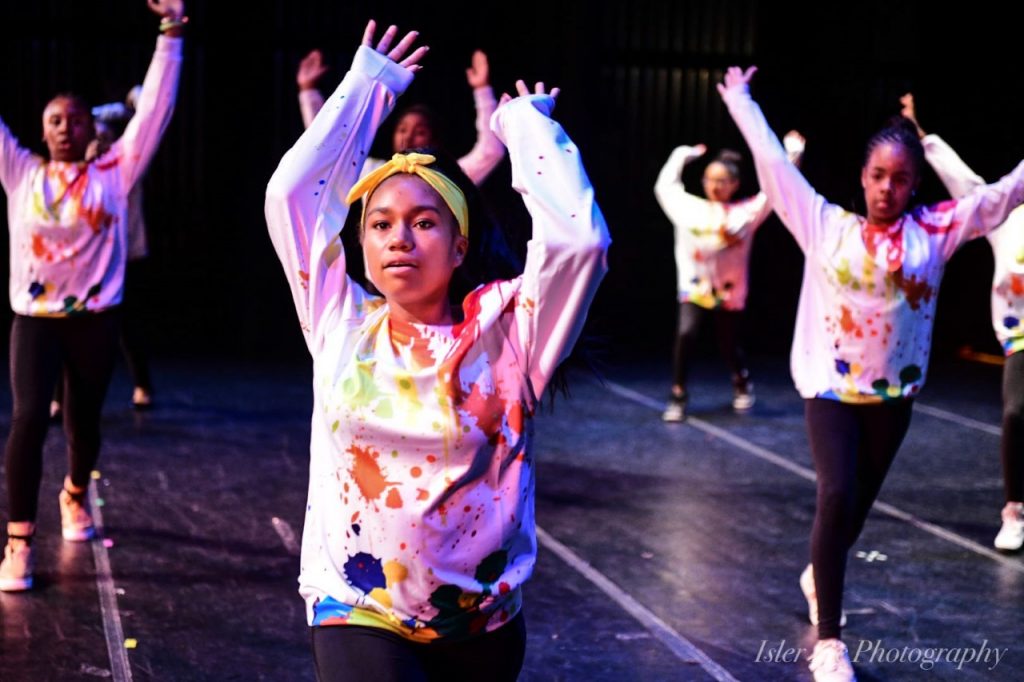 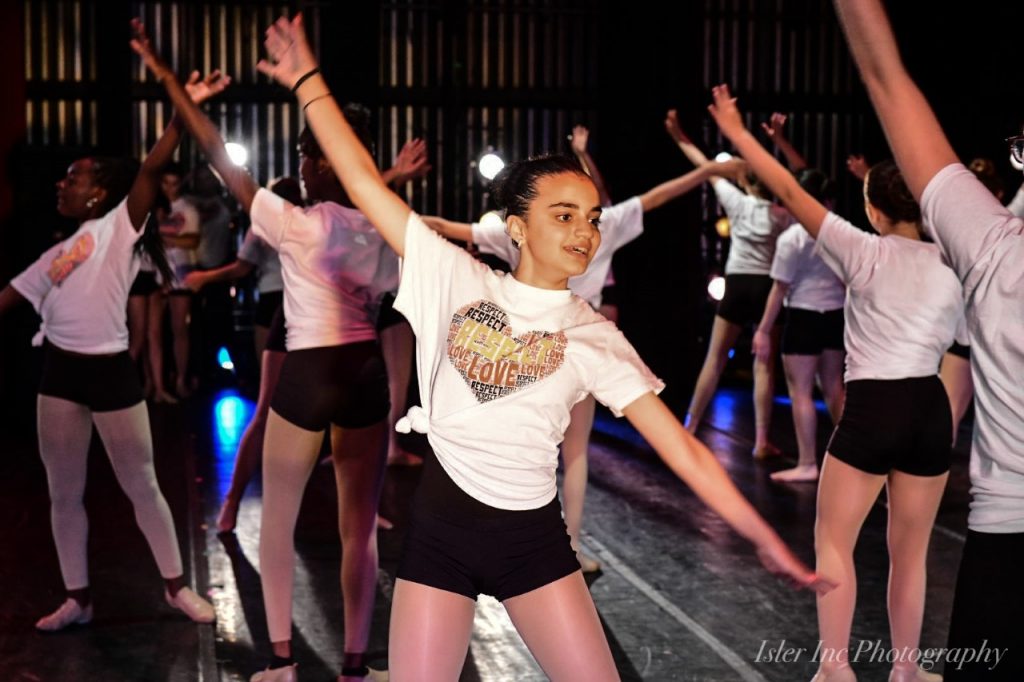 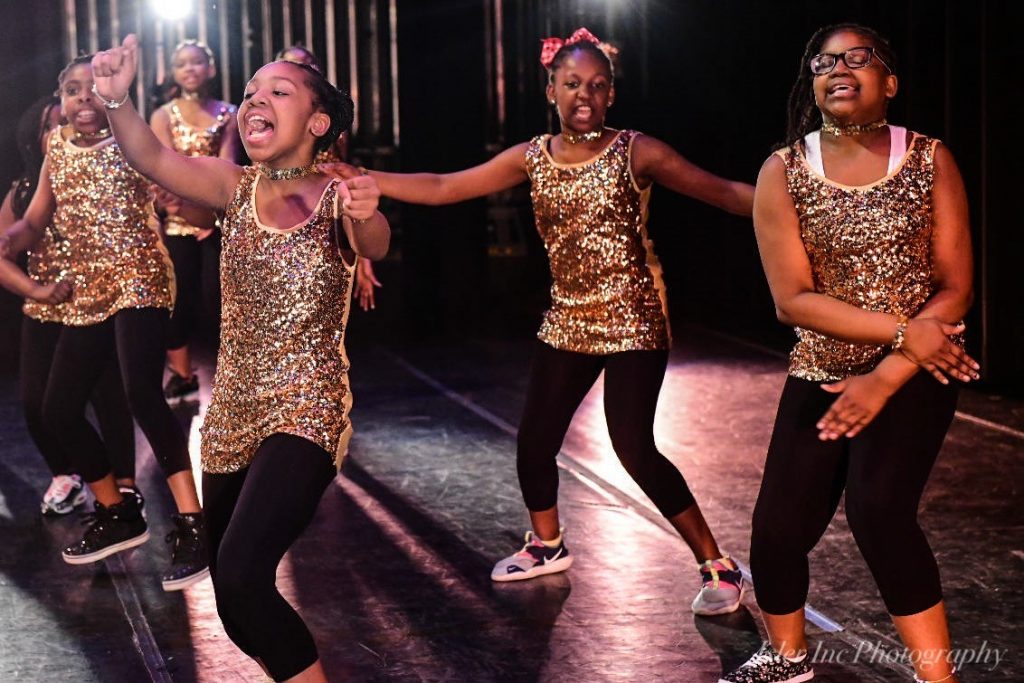 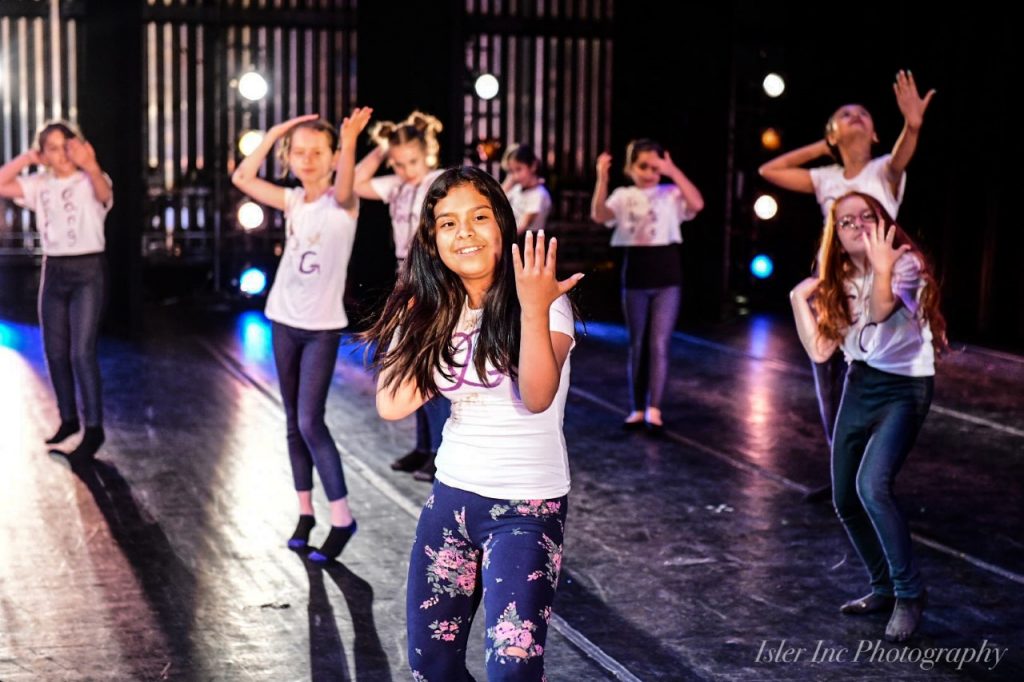 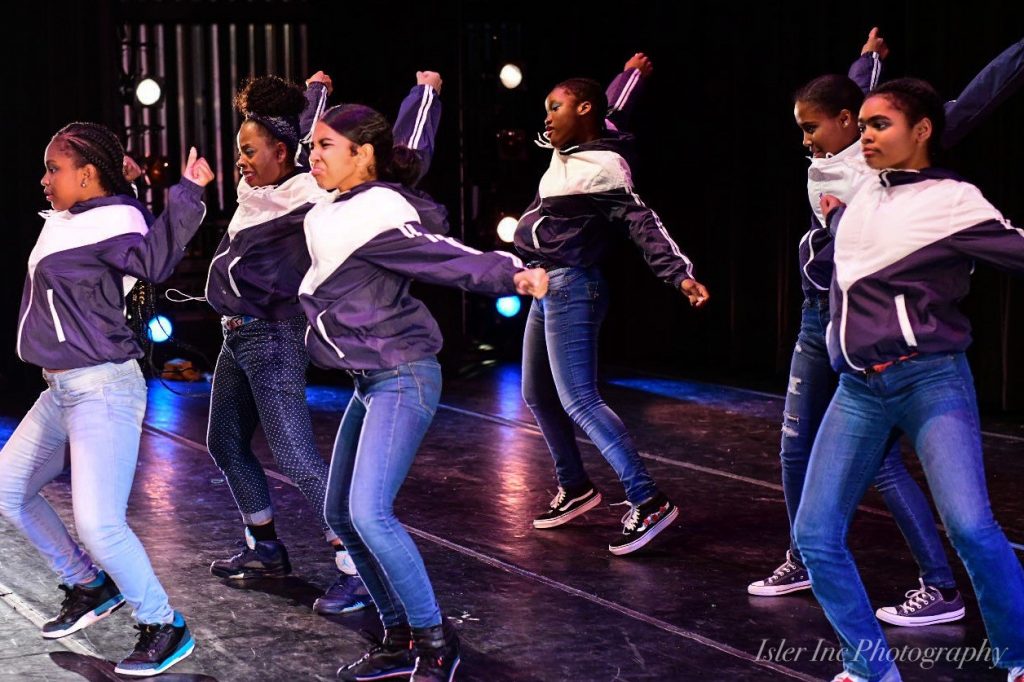 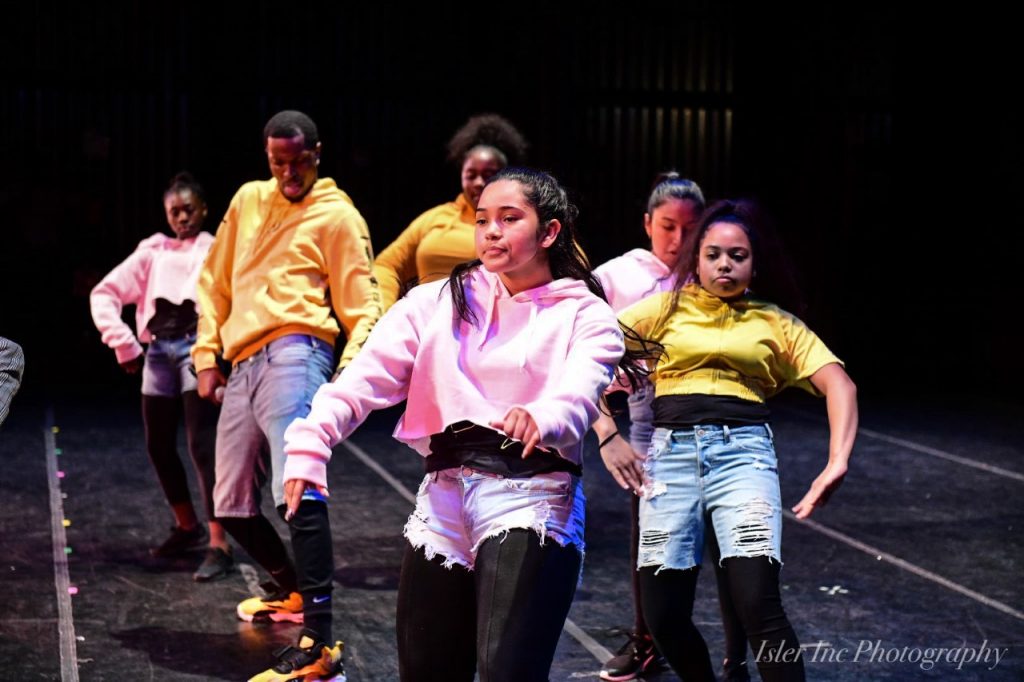 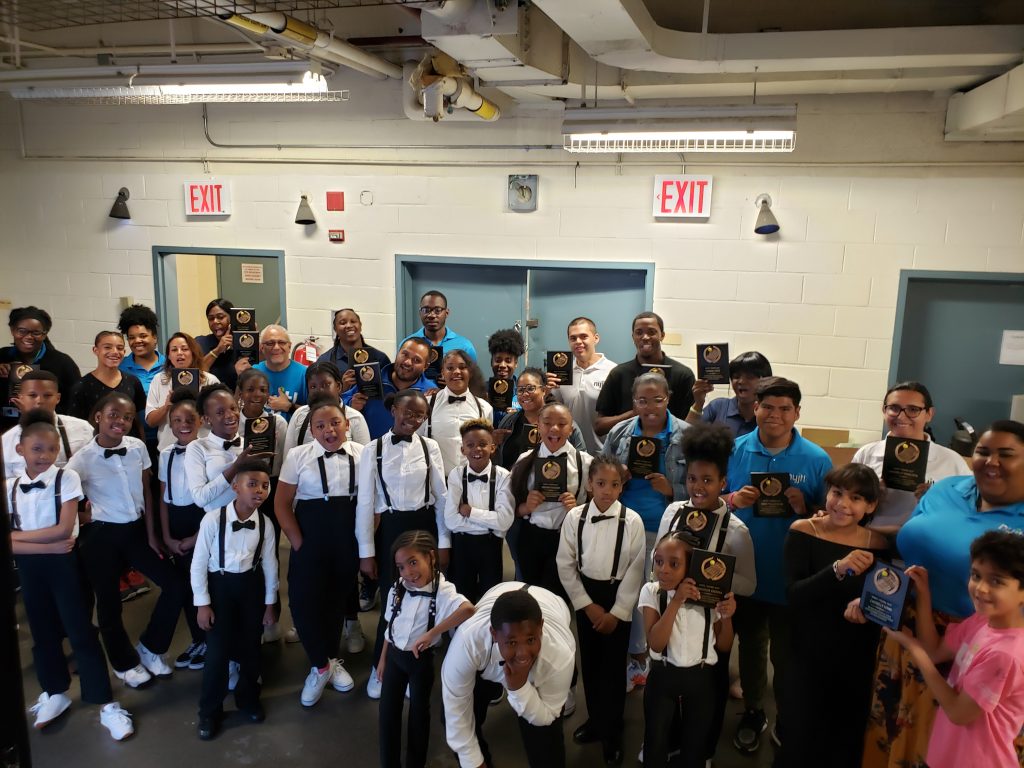