The phenomenon “summer slide”, or summer learning loss, refers to the tendency for students, especially those from low-income families, to lose some of the academic skills gained during the previous school year due to lack of exposure to educational activities during the summer. This is because a student’s exposure to educational activities is often not as rigorous during the summer. New York Junior Tennis & Learning (NYJTL)’s ACES Afterschool Program (ACES) works actively to create an enriching and productive summer experience to prevent loss of learning, especially amongst under-resourced communities.

In partnership with the NYC Department of Education and Department of Youth and Community Development, ACES has stepped up for a second year to support Summer Rising, which aims to spark curiosity, joy, and love of learning during the critical summer months. Starting on July 5, NYJTL will combine academic support and school-based enrichment programming to provide daily opportunities for students across the city to play, create, explore, and develop new interests. Summer Rising makes summer learning and academic resources available and accessible, which is especially critical for the underserved youth that NYJTL serves through the ACES program. 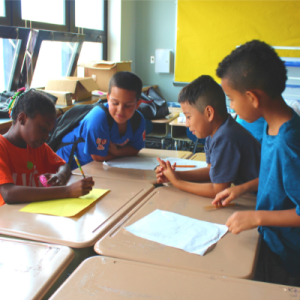 “We are excited to bridge the gap in learning to ensure our youth continue to succeed throughout all twelve months,” says NYJTL President & CEO, Udai Tambar. “Supporting the City Hall’s Summer Rising initiative through NYJTL’s ACES Afterschool Program ensures that our youth have access to resources they otherwise may not have during this crucial time and build on their skills ahead of the next school year.”

This joins a number of other initiatives and programming implemented to counter the effects of summer slide. Earlier this month, all ACES Afterschool participants received summer kits as they end the school year that consist of a beach towel, interactive games such as Jenga and UNO, lip balm, and a book. These kits provide and inspire easy, enriching, and fun activities for NYJTL youth and their families over the summer. Additionally, in September ACES will celebrate Banned Book Week, an annual awareness campaign that celebrates the freedom to read. As part of this, all eighth-grade participants will receive copies of books that have been banned.

NYJTL continues to provide resources and increase accessibility to combat the tendency of summer slide, especially among low-income families, to ensure that our children succeed on and off the court, year-round.