“NYJTL is the culmination of our founder Arthur Ashe’s vision to combine tennis and education to change the lives of underserved youth,” says NYJTL President & CEO, Udai Tambar. “We are proud to screen this original film to instill in our children Ashe’s principles of justice, advocacy, and resilience against life’s greatest challenges, teaching them through his example that tennis is much greater than solely what is played on court.” 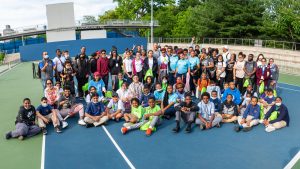 The ACES students, all coming from the local south Bronx community and poorest Congressional district in the nation, gathered in the state-of-the-art Cary Leeds Center for Tennis & Learning to hear from the film’s creator Rex Miller. The afternoon included an on-court component to actualize Ashe’s vision of utilizing tennis and education as tools for social good.

“This screening really represents why I love making documentaries,” says Citizen Ashe filmmaker Rex Miller. “Johnnie Ashe, Arthur’s brother, told me that the importance of this project is the educational component, and sharing Arthur’s story. A room of kids, mostly of color, all now know who Arthur Ashe is. I played high school tennis with many of those involved with the creation of the Cary Leeds Center, so it was extra special for me to return and bring this legacy here.”

Following the film, the students engaged in a weighty discussion. Many students spoke about Ashe’s resilience, leadership, and compassion especially as he navigated his own struggles with AIDS while fighting for marginalized communities. They were struck by the different life skills that tennis taught Ashe, along with his passion for inclusivity.

“This NYJTL event is so important because it uses film and storytelling as a catalyst to start conversation,” says Chief Operating Officer of Picture Motion Campaigns LLC Juliette Richey, “it introduces a generation to Arthur and his activism for racial injustice and inclusion. Arthur and tennis teach these young kids discipline and leadership. Whether they become athletes or not, these youth build a foundation into adulthood.”

NYJTL hopes to continue to provide creative mediums to spark meaningful conversations with the youth that we serve, especially connecting them to the life and legacy of Arthur Ashe.

The mission of New York Junior Tennis & Learning is to develop the character of young people through tennis and education for a lifetime of success on and off the court.  Since 1971, NYJTL has changed lives through tennis, education, healthy living, and character development programs.  Today, it is the largest youth tennis and education non-profit in the nation, reaching more than 85,000 K-12 New York City youth.

NYJTL provides after school programming in approximately 30 schools and community tennis programming at approximately 40 sites throughout New York City in the summer months and at additional sites that operate during the school year.  In addition, NYJTL designed, funded (with NYC), built and operates the Cary Leeds Center for Tennis & Learning, at which it provides free and commercial tennis programming year-round as well as life skills, character development and healthy living lessons.  All NYJTL community tennis and after school programs are offered at no cost to its participants.

Picture Motion is the leading social impact agency developing award-winning advocacy and marketing campaigns for films, books, art, and entertainment having produced 200+ social impact campaigns for every major social issue including gender rights, racial justice, climate change, criminal justice reform, and many others. Picture Motion’s mission is to leverage storytelling to inspire empathy, convene people, and ignite brave conversations and action. For a decade filmmakers, artists, studios, and brands have turned to Picture Motion’s expert team of impact strategists to amplify their content, mobilize key communities and change makers to drive impact beyond the credits. These campaigns have empowered, educated and provided action opportunities for all audiences. Stories can change the world, we make sure they do. Find us on Twitter, Instagram, and picturemotion.com