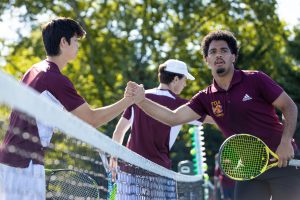 By being resilient to life’s challenges and having the ambition to be the best you can be, any dream is attainable. Derwin Guzman knows this to be true. Derwin’s journey with New York Junior Tennis & Learning (NYJTL) started more than a decade ago. At the age of six, he started in the Community Tennis Program (CTP) at PS 187 in Manhattan. Now, he just graduated high school from the Frederick Douglas Academy and led his team to victory in the PSAL tennis championship- the first time his school achieved this title in its history!

Though his athleticism started from a young age, Derwin’s first sport was not tennis. Focused solely on basketball, Derwin was encouraged to join his school’s tennis team by his coach that led both teams. During his first year of high school when he told his basketball teammates that he would not be returning to the sport in the next season, they teased him saying that “tennis is for soft people” because of the lack of physicality on court. Still, Derwin continued. He soon found that tennis brought him a sense of peace in a way that he had not experienced. He participated in various NYJTL programs, from ACES Afterschool, to CTP, to the Intensive Training Program. These programs instilled the importance of being both a scholar and an athlete. “My continued participation in NYJTL taught me invaluable lessons that stretch far beyond the 36’ by 78’ lines of the court,” says Derwin. “Tennis promotes physical growth, exercise, making friends, fun, fair play, and improved self-esteem.”

NYJTL’s tournament opportunities shaped Derwin to be the competitive player that he is today. His participation in the NYJTL Mayor Dinkins Cup, previously known as the Mayors Cup, was especially pivotal because it was the first time he competed on a team, which taught him about the importance of sportsmanship. His mentor at NYJTL for more than seven years, Coach Willie, guided his journey with the sport. “I always came last in the games we played but Coach Willie always pushed me to keep going regardless of the outcome,” Derwin recalls. 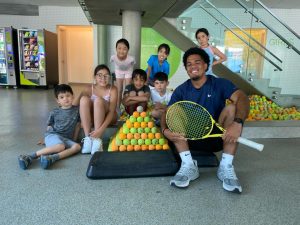 Today, Derwin is a coach himself, this time at the Cary Leeds Center for Tennis & Learning! Many of the young children he works with admire his patience and insight when he teaches them new skills.

NYJTL is so proud of Derwin’s success! The combination of tennis and education was a powerful force in his life. As a high school senior, he was the student body representative for his class in student government. NYJTL is proud to award him the Gavrin Family Foundation Scholarship of $8,000 over four years as he heads to Manhattanville College this fall, taking his racket with him!