“Partnering with Grand St. Settlement is the fulfillment of the original vision Arthur Ashe had to utilize tennis and education to better the lives of our city’s most under-resourced youth,” said NYJTL CEO & President Udai Tambar. “I believe these communities we are beginning to reach will become part of the essential fabric of our mission, network, and family.”

“New York City youth need options for quality, enriching, and fun activities when they are not in school and their parents are at work,” said Grand St. Settlement Executive Director Robert Cordero. “This partnership with NYJTL will give thousands of young people the opportunity to learn and exercise through tennis, a sport that is admired but rarely played in the neighborhoods we serve because of barriers to access.”

CTP at the Grand St. Settlement locations will be run by longtime NYJTL team member Joyce Short. Coach Joyce is currently the Site Director for CTP in Roosevelt Island, which she first opened in 1991. In her 30 years of service to NYJTL, she has worked with thousands of children and families to strengthen their character and development through tennis. In her role, she manages staff, creates curriculum, and instructs youth who participate in the program. She also serves as the District Developer for Manhattan and Eastern Queens, where she recruits schools and assists them in incorporating tennis into their physical education curriculums.

Coach Joyce’s impact is far reaching, and tangible for many of the kids she works with. One family that has witnessed these contributions first hand is the Santamaria family, who has three children who are actively involved at the CTP site in Roosevelt Island – both as coaches and players. Amidst the pandemic, their father struggled with his own recovery from COVID-19, so it is especially rewarding for them to be able to return to the court under Coach Joyce’s leadership.

Moreover, Anthony Garcia, one of her students at the Roosevelt Island site, was recently awarded $10,000 as the recipient of the Nora McNeeley Hurley Leadership Award from the USTA Foundation based on his academic excellence, participation in NYJTL, and community involvement.

The work of team members like Coach Joyce exemplifies the importance that programs like CTP have on under-resourced youth and families, and it is exciting to see its growth and impact on new communities. Grand St. Settlement’s sites and NYJTL’s skilled staff and targeted programming will strengthen shared missions of promoting healthy living and community-based learning to NYC youth who need it most. 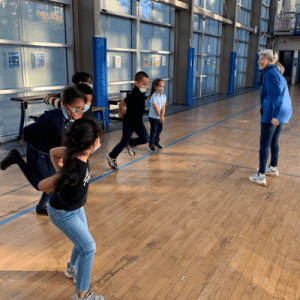 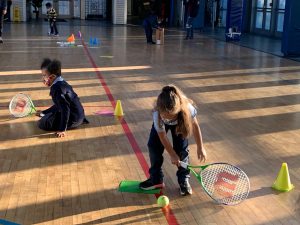