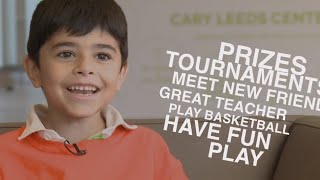 Ahsha Rolle
Director of Tennis
Ahsha was previously the Director of Adult Programs at the Cary Leeds Center and under her tenure those programs have seen extraordinary growth. Cary Leeds Center customers will continue to see Ahsha on-court delivering the very highest quality programming. Ahsha turned pro in 2007, after reaching top 20 national ranking in Junior Girl’s 18s. Having trained under Lori McNeil, #9 in the world in singles and #4 in doubles, and Ola Malmqvist, the head of women’s tennis at the USTA, Ahsha has achieved a career high ranking of 82 in the world in singles and a ranking of 111 in doubles for the WTA. She has played in all four Grand Slam tournaments at least twice, and has reached the 3rd round of both the US Open and Indian Wells in 2007. Ahsha also competed in the semi-finals Fed Cup tie against Russia in 2008. As staff pro at the Cary Leeds Center, she teaches Adults and High-Performance Juniors, seeking to develop each player’s unique game-style to help them reach their full potential with a blend of strategy drills and games to keep players engaged. In her own words, “Real growth occurs outside of your comfort zone, so I have a passion for pushing players to new levels in their games.” Contact Ahsha at arolle@nyjtl.org
Scott Hausthor
Vice President of Operations
Scott spent over 11 years working for the United States Tennis Association in several different capacities, supporting numerous business units including Player Development, Professional Tennis & the Billie Jean King National Tennis Center. While working for Professional Tennis he was part of the USTA Pro Circuit department, now part of the USTA Competitive Pathway, collaborating with Tournament Directors, guiding athletes along their professional tennis journey as well as serving as staff liaison for the USTA Pro Circuit Committee. He then transferred to Player Development where he helped shape & eventually oversaw Training Center-East, one of Player Development’s National Training Centers, based at the home of the US Open, focusing on junior supplemental training. This led to an opportunity for Scott to join the rest of Player Development at their newly constructed headquarters located at the USTA National Campus in Lake Nona, Florida. There he ensured alignment among coaching efforts and resources with Player Development's mission, providing strategic, financial & administrative support to the General Manager of Player Development, Heads of Men’s & Women’s Tennis and Director of Coaching. Born & raised in Queens, NY, tennis has always been a part of Scott’s life. He received his Bachelor of Science in Sports Management in 2007 from SUNY Cortland where he served as the Women’s Tennis Assistant Coach for 2 seasons. Contact Scott at shausthor@nyjtl.org
Jayadeva (Jay) Devashetty
Director of Player Development
Jay spent nine years working as a national coach for the United States Tennis Association based in NY at Training Center – East. Jay was responsible for implementing the USTA teaching philosophy to top national juniors and professional players. Some highlights include coaching Kristie Ahn into the second week of the US Open last year and Ann Li to the finals at Wimbledon’s Juniors in 2017. When Jay was a player, he would rise to top 5 in juniors and top 10 in men’s in India. Contact Jay at jdevashetty@nyjtl.org

Shenay Perry
Associate Director of High Performance Juniors & Adult Programs
Shenay Perry turned pro in 2000. She played on the WTA tour with a career high of #40 in singles and #97 in doubles, and retired in 2010. Shenay has been in high performance coaching for the last 11 years and has coached players on the ITF, the USTA junior level and the WTA pros. She has worked with some remarkable players like Coco Gauff and Sofia Kenin as juniors and Kristie Ahn at the pro level. She has coached players to D1 schools such as Princeton, University of Florida, Michigan, and more. Shenay won nine singles, seven doubles ITF titles, and made it to round of 16 at Wimbledon in her career.
Adam Slifkin
Director of Junior Programming (ROGY)
Adam has 20 years of experience on the tennis court. He attended Weil Tennis Academy from 2005-2008 and while there trained and competed with some of the best players from around the world. From 2008-2012 Adam played for SUNY Oneonta while earning his B.S in English. During the summer from 2008-2012 he started coaching and quickly discovered his passion for helping juniors become the best student athletes they can be. After college Adam began coaching tennis full time, working with junior tennis players of all levels. Over the course of his 10 years of coaching Adam has developed his high energy, positive, and encouraging coaching style. Adam has worked with four year olds, high school players, top junior tournament players, adult players, senior players, and every type of player in-between. He prides himself on bringing the same level of enthusiasm for every player, regardless of where they are on their journey as a tennis player. By instilling the importance of effort, tenacity, focus, and positivity in his players, Adam helps them build the foundation they will use to excel at, not only the techniques and tactics of tennis, but also anything else they decide to pursue.
Michael Nortey
High Performance and Junior Development
Michael was a world ranked ATP tour player for Ghana and represented his home country in the 2007 Davis Cup. Equally adept at coaching, his passion for the game is infectious and comes through on court. As a professional coach at the Cary Leeds Center, he works at developing the skills and techniques of high-performance green dot players. Michael also sends money and tennis equipment back to the young players of Ghana in order to encourage the same passion for the game that brought him to achieve world-wide success.
Danlahdi Jelahni (Coach Jel) Robinson
High School Varsity Team
Coach Jel grew up playing tennis with his dad Charles Robinson and sister, Shadisha. He trained in the Youth and Tennis program in Queens and also in the NYJTL program at Bronx International. He played varsity tennis at Brooklyn Technical High School and went on to win the Mayor’s Cup in doubles his freshman year. He competed in both doubles and singles in at Saint Francis College in Brooklyn Heights. He started teaching tennis while still in college and continued to do so after he graduated. Coach Jel runs the High School Varsity Program, and was the first coach onboard the team when the Cary Leeds Center opened its doors in 2015.
Sam Gornes
S&C Specialist and Tournament Team
Sam grew up playing tennis through the programs at the Billie Jean King National Tennis Center in Flushing Meadows. After playing college tennis at Binghamton University, he earned his USPTA teaching certification and started coaching with the NTC in 2015. Shortly after graduating, he became a certified personal trainer through the National Academy of Sports Medicine. While at the NTC, he would coach various classes from 10 & under, to high performance, and adults as well as leading the fitness classes for students in the high-performance pathway. Outside of coaching, Sam also trains and competes in Olympic style weightlifting, and is a USA Weightlifting L1 certified coach. While at Cary Leeds, he now coaches Tournament Team, high performance, and adults on the court, as well as fitness for CLC Academy and Premier.

Trisha Soogrim
Director of Business Operations & Client Services
Trisha is a college graduate from Pace University with a BBA in Business Administration in Finance. She has over 10 years' experience with non-profit organizations in the medical field. She has grown to love tennis throughout the years and finds her work at the Cary Leeds Center fulfilling. Contact Trisha at tsoogrim@nyjtl.org